Ah, yes. Spring is here. The weather is warming up, the sun is beaming down. My husband is getting older, his hair grayer (and less hairier). His normal weekend routine of sitting on the couch drinking a beer while watching home improvement shows is becoming boring. This can only mean one thing:

Recently, my husband has flirted with the crazy idea of not only buying a bike (and to my horror, not a Schwinn– but a chopper), but actually riding on one.

I get it, honey. Your life is humdrum. The open road is calling. Adventure awaits just around the bend. Somehow zipping down the highway–exposed to all the elements, the bugs in your teeth, the wind in your hair, the giant tractor trailer trucks blowing you around like a feather– is what people yearn for when their lives become a bit stale. I can only assume risking one’s life tooling down the road just to pick up some deodorant at Walmart must be an exhilarating experience. (Be sure to pick up some Depends too for the ride back when that tractor trailer truck nearly sideswipes you.)

I know why he wants to ride. I once had a dream of becoming a motorcycle mama. I even managed to recruit some of my friends to share in this fantasy. We’d form a motorcycle gang. (Yeah!) We’d leave our lives behind and hit the open road. (Hell, yeah!)  Drive to destinations unknown. (Helllllllls yeah!) and become rebels without a clue! (Uh…what?)  It would be so…Easy Rider-ish.  We could all wear pink leather from head to toe and call ourselves The Pinky Tuscaderos. Or The Leather Tuscaderos. Probably The Pinky Leather Tuscaderos. 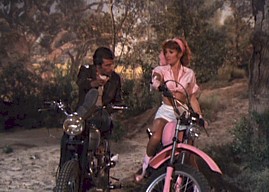 The Fonz seems to dig her. Or maybe he’s gesturing for her to jump the shark. Either way, I like her style.

Although, something tells me I’d look more like this: 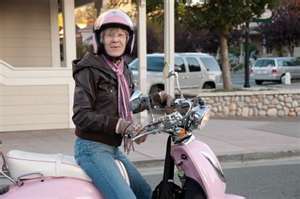 No matter. I can drive a scooter, right? Sure. A slow-as-death scooter with a basket for my medications and a cool ringie-dingie bell on the handlebars to keep those pesky young whippersnappers at bay, dagnabit.

The only problem is: I am a giant klutz. When it comes to bikes, or any other mode of transportation that requires coordination, balance, and the ability to remain upright, I am a failure. And it’s been a painful lesson to learn.

Here’s a quick rundown of a few of my many (many!) past accidents over the years.

1977: Fell and rolled down a hill after attempting ‘Shoot the Duck’ with my 1970s metal-wheeled rainbow roller skates with the bright red pom poms.
Outcome: twisted ankle, ruined skates, lost ability to be ‘funky’ or ‘groovy’ for weeks afterward

1981: Fell off my brother’s skateboard after hitting a bone-shattering 30 mph zipping down ‘Death Hill’ Drive after my friends dared me.  (Plus one of them promised me some of their Pop Rocks if I made it to the bottom of the hill alive, and no kid will resist that prize, am I right, Angie?)
Outcome: skinned knees, twisted ankle, bruised ego, three packages of Pop Rocks

1981: Slid off banana-seat bike while making a sharp corner (and belting out the theme to ‘Gimme a Break’ off-key). Crashed into my brothers and left behind a twisted heap of Schwinn carnage that was the talk of the neighborhood the rest of the summer.
Outcome: road rash on every single part of my body

1981: Fell off my 10-speed while in hot pursuit of older brother after he stole my Big League Chew. Landed in ditch. Survived, only to have my best friend who was following close behind, run completely over my body with her bike.
Outcome: Bruises on every part of my body, kidneys swollen to watermelon-size, still Big League Chew-less

So…notice anything about the above trip down Clumsy Lane? Well, for starters, apparently 1981 was a very bad year for me. Also, I’m no fool. I know the only way I could even attempt riding a bike again, let alone an actual motorcycle, it would have to be along these lines: 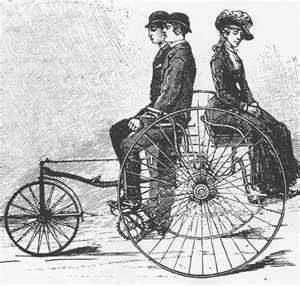 But I am middle-age. I do crave adventure. I want to get my motor running and head out on the highway looking for adventure and whatever comes my way. Still, I don’t want to end up in the hospital. My husband is actually more of a klutz than I am (on our first date, he fell into a stream while attempting to putt through the big windmill at the mini-golf course) Plus he’s a big guy, 220 pounds, six foot one. I don’t think he’s built to be on a bike.  He’d be too heavy, too tippy.

Of course,  then I realize if he does buy one, he could also purchase a rather snazzy leather jacket and he’d look like this:

So I thought maybe this motorcycle thing could be a good thing. Cool even. Definitely sexy. As long as he stays stationary.

But once he’s actually riding the motorcycle, I know I’ll be at home worried sick because he will end up doing something like this.

Maybe I can convince him to buy one of these instead? 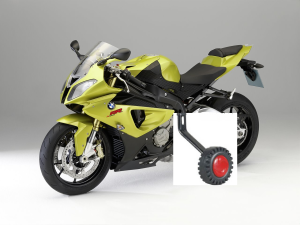