At first, I usually try to avoid most things popular in this digital social media technological-informational-crappola-highway-to-hell that is Facebook, Twitter and Pinterest. Mainly so I can smirk when people ask me why I’m not obsessed with the latest app or fad like the rest of them. Then I normally cave and get sucked into it like all the other mindless drooling souls out there.

So it’s no surprise that I’m late to catch the Words With Friends  bandwagon. (Apparently a bandwagon for nerds who like to stare cross-eyed for hours at a jumble of letters for fun.) Sure, I suppose you could say I am also a nerd. And yes, I’ve played Scrabble many times in the past and was terrible at it. And okay, I tended to stick with the easy two or three letter words and would always lose to the person who’d put down ZYGOTE or QUASI.  Still my interest in this WWF craze was piqued when I read that Alec Baldwin famously brought the airline industry to a grinding halt because he was hopelessly consumed with the game.

Finally, I gave in and played my first WWF game last week on Facebook. Before I knew it, I was playing several games at once, with about 100 different people. Right away I’ve noticed a few things, a few tricks people use. First, they most likely are spending their turn googling all the word combinations (I believe that’s called cheating. I’ve never done it, of course. You believe me, right?)

Next, they try their hardest to use little known words like ODALISK or ADZUKIS and get a billion points in one turn, while I put down words like SING and HAT. Nice words but they ain’t worth jack. (I’m not even sure AINT will net you much.) My feeling is, you shouldn’t be able to put down a word if you don’t know the meaning of the word without looking it up first. Hence, why I use SING and HAT all the time. This might also be why I lose all the time.

Clearly, I suck at Words With Friends. I don’t think I’ve won a game yet. And oh, have I tried. Sometimes, late at night, after my eyes have completely crossed and my brain has melted, I try to throw in some weird letter combinations, y’know, in the off-chance that these words actually exist. And I think some of these words I’ve invented should exist. For instance:

SNIRG (verb) The embarrassing sound one makes when snorting and scoffing at a snarky comment because they know deep in their heart it’s true.
And then she had the nerve to tell me that I was the worst Words With Friends player in the history of the world and my only response was to snirg uncontrollably. 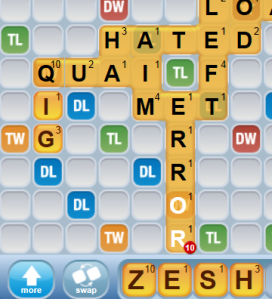 (notice I have the ever-popular ZESH waiting in the wings for that all-important triple word score. Zesh, of course, meaning when you bite into something zesty yet real mushy, like a pomegranate.)

ZEQUISH (adjective): The state of getting dizzy while failing in your attempt to quiet your mind during Zen meditation.
I was trying so hard to empty my mind, so I chanted “OM” and closed my eyes. Then tomorrow’s grocery list popped into my head and I began thinking about all the ways I could cook a damn chicken and I started to feel so zequish I had to stop.

NERSH (verb): When you crush a nerdy opponent in a Words With Friends game by using either X, Q, or Z with three different words all in one turn for big time points.
I was losing by 300 points when I made my move and totally nershed her with the word QIVIUTS! OH, I wish I could’ve seen her face! Take that ,suckah!

ZANG (noun): 1. When you get carried away while cooking and add something incredibly spicy to a recipe that will probably set your tongue on fire.
Hmm…this chili could use a little more zang. Throw in a few tablespoons of cayenne pepper and some tabasco sauce. Ah, hell, put in the entire habanero!
(verb)   2. When you are so eager to eat or drink something you know is scalding hot, you think blowing on it will cool it down enough and you end up repeatedly giving yourself second degree burns on your tongue.
Dude! That pizza just zanged the hell outta my mouth! But I can’t stop eating it. Can you take me to the emergency room?

(for those of you that questioned the other word I created above, GPUNA, well nice try, but I do believe that is a small nation nestled between the country of Ghana and a puna (which is obviously a high, cold, arid plateau, as in the Peruvian Andes). So what if they’re on different continents, this isn’t a geography test.) 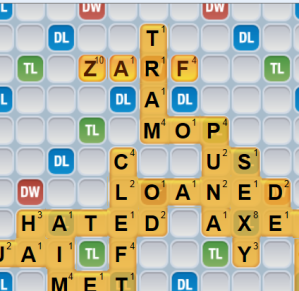 ZARF (verb): When you are so tired of losing Words with Friends you start to feel like you’re going to be sick.
I swear to God, if she uses the letters Z and Q in the same word and gets the triple letter score, I am going to seriously zarf!

These are just a few of the words I’ve tried. Maybe some day soon the dictionary gods will recognize them. As a matter of fact, I’ve just discovered that ZARF is, in fact, a word.  Definition: (esp in the Middle East) a holder, usually ornamental, for a hot coffee cup. Further proof that my made up words are catching on! This is great news because the next time I’m in Egypt on my way to Gpuna and order a grande cappuccino at Starbucks I’ll have the benefit of snirging at the barista, “What the qig?! Damn, is this like a billion degrees? I just zanged my tongue! And hey, can you give me a freaking zarf for this thing, it’s burning the hell outta my hand!”

Until then, wanna play a game with me?  C’mon, you know you wanna….I promise you, I will lose.

70 thoughts on “I Need to Have a Word With You, Friend”