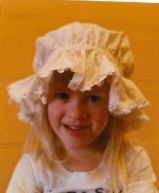 When I was 12, I had my first real job. Real in the sense that I was off by myself. Taking care of other human beings. For very little pay. I earned peanuts. Actual Circus Peanuts. Maybe a couple pouches of grape Big League Chew and a Mello Yello if I was lucky. (Nine bucks for three hours work didn’t go very far, even in 1981.)

My job? Babysitting.  I did it to build up my self-esteem, to prove to my parents I was responsible. Plus I wanted to save up enough money to buy Shaun Cassidy’s Da Doo Ron Ron on 8-track. Also, the family I babysat for had cable. MTV was all the rage back then–when they actually showcased music. I thought maybe I could spend the evening sitting on the couch like a zombie, watching ‘Video Killed the Radio Star’ over and over while the kids quietly played Tiddlywinks on the floor.

I knew I was in deep trouble when I arrived the first night to find three giggling girls–one grinning while ominously holding up a jump rope–their newborn sister crying in her crib in the distance. Ah, but knowing I had to change a squirming baby with safety pins and stinky cloth diapers was the least of my worries. As soon as their parents left, the twinkle vanished from the girls’ eyes, replaced by cold dead stares. They informed me it was time to play Cops and Robbers and would I “pretty please” sit down in the chair and close my eyes for “just a second?”

As I sat there, tied to the kitchen chair by jump ropes while they ransacked the place looking for Kool-Aid and Devil Dogs, a thought crossed my mind: working sucks.

Babysitting does have its perks though. Just ask Angie Z. of Childhood Relived–she babysat the wrong kids, played a little Mario Bros., ate a disgusting Ritz cracker, and lived to tell us about it. And because of her story, she won my contest. Close to 100 people voted and most thought she had the most embarrassing story.

See, babysitting does get you far in life. She is now the proud owner of a bunch of Maine-ish crap. Maybe she’ll get her husband, Mr. Brady, to wear the cool baseball cap so when he drives them to the Grand Canyon and gets lost, he’ll be able to light the way back home.

Big thanks to the finalists, Pegoleg, Ape No. 1, k8edid and Cassie— I will never look at lederhosen, electric fences, cats and Denny’s Grand Slam breakfast the same way again.

I want to also thank the rest of you for baring your souls for me. My husband and I thoroughly enjoyed laughing at you. If you have any other humiliating stories you’d like to share, you know my email. I’m working on a novel and need some good character backstories that would explain their many quirks and neurotic tendencies.

Congrats, Angie!  I certainly hope your babysitting skills have improved now that you have kids of your own. Have you checked them lately to make sure they’re yours?

Angie Z., future Most Clueless Babysitter of All-time, during her innocent ‘I-want-to-be-Nellie-Olsen’ Little House on the Prairie phase.

95 thoughts on “I worked hard for the money, so hard for it, honey…”