Welcome to the first installment of weekly no holds barred, profanity-laced, semi-comedic rants straight from the rambling mind of the Supreme Destroyer of Bullshit — The Maineiac.

I remember a few years ago when Al and Tipper Gore dropped the big bomb on us. Apparently, it was top news that after 40 years of wedded bliss — after popping out several kids, rockin’ the robot dance at the inaugural ball to Aerosmith’s Dude Looks Like A Lady and displaying one chillingly awkward public kiss — their marriage was over. 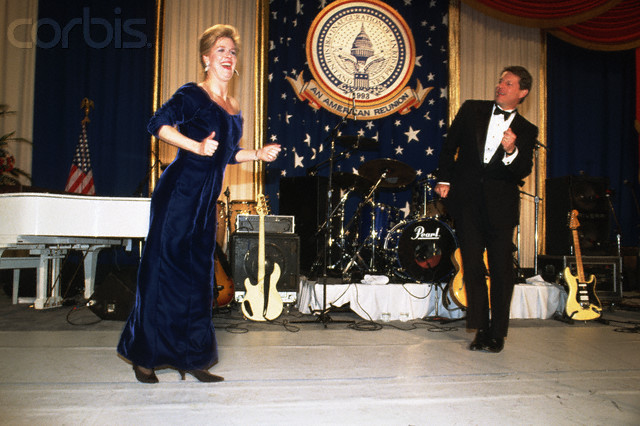 “But it can’t be!” people cried. “How is this possible?” people gasped. “Oh! But it’s so sad! They were married 100 years! And to end it after all that time? It just doesn’t make any sense! Such a shame!”

Shame? I’ll tell you what’s a shame — that we aren’t admitting what really happened to their relationship.

We all know one day Al was lounging in his silk bathrobe in his king-sized bed, smoking a cigar and writing his upcoming book, Hanging Chads, Climate Change & Other Big-Ass Bummers, when he turned to look at Tipper’s green mud-mask-caked face and said:

“Hey, honey? …we’ve been together what…forty-odd years? Well, for forty goddamned years I have had to wake up and see your goddamn fucking face every goddamn fucking morning. And you know what? I am sick of this shit. I am tired of watching your mouth flap on and on and on. I have finally fucking had it. It’s over. This shit is done. Finito. Peace out, dude.”

Then he carefully took off his reading glasses and shuffled into the kitchen to knock back a shot of Metamucil and call his lawyers.

It’s true. This is definitely what went down in their marriage.

At the beginning of every relationship, we all manage to hide our own deep personal shit. Stuff we cram down and try to bury with either sex or booze or chocolate. Stuff we bring to the marriage from our own bad childhoods. Most of us are basically more than a little screwed up from the get-go.

Then we bring this shit to the table. We show it to our spouse, but slowly over time so they won’t run away in horror.

But you can’t hide it forever can you?  That’s when your spouse realizes, Hot damn! You have some serious messed-up shit!

The longer your relationship,  the more you reveal. Then your spouse starts to think, Oh no! HELL no. This is WAY too much shit to deal with! I got my OWN shit! I can’t handle YOUR shit too!

This is often why people get divorced. It’s not just because someone cheated. It’s not because of arguments about money or parenting or crack habits. It’s simply “Hey, y’know what, honey? I’ve been thinking things over and….um…I have come to the realization that I am officially bone-ass sick and tired of you and your shit.”

For some couples this takes a few decades. Others, only a few months. It’s that moment of clarity when it hits: I am sick of you. There’s no shame in this. Don’t beat yourself up. It’s only natural. And very likely your significant other feels the same way.

It’s really not a question about love. Do you love your spouse? Of course you love them! This is why marriage can suck the life blood out of you.  It’s all the little daily annoyances that build up over time. It’s more a question of “how much shit can I stand and for how long?”

It’s your sanity versus loving your partner. One chips a little bit away from the other. You have to ask yourself the hard questions:

But I love my husband, so I suffer on through it.

And he puts up with my severe, unpredictable hormone-fueled mood swings and extreme hatred of Alan Alda.

I think it’s a fair trade.

People that have been married 50-60 years — we celebrate them. We think, “Wow! they must really have their shit together!” We are in awe of these couples, we hold them up as a high standard that we one day hope to achieve. “Damn! They must really love each other! They must be soul mates!”

Oh no. Sure, they love each other. But y’know what it is, really? Why good ol’ Martha and Frank are still together after slogging it out day after day, year after year, decade after soul-sucking decade?

Because those two can really put up with a whooooole lotta shit. 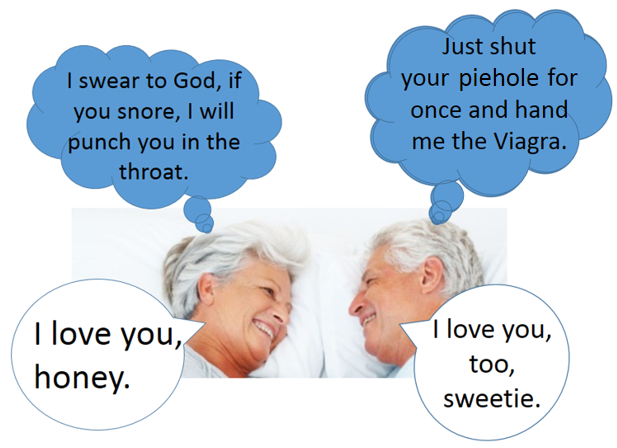