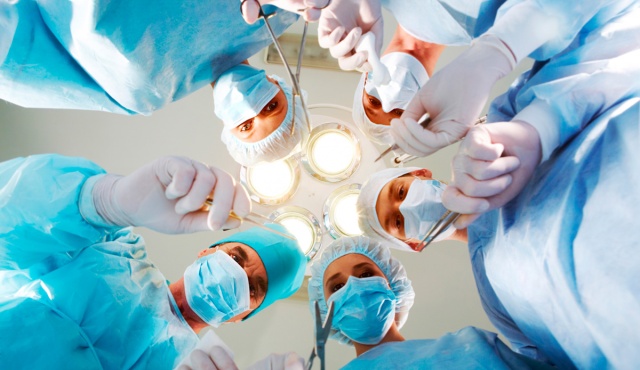 A few weeks ago I underwent abdominal surgery. If you’ve ever had surgery, the first thing you notice is how many times the nurses and doctors ask you what you’re getting done.  Apparently, this is their safeguard protocol in case you’re there to have a tonsillectomy and instead end up with one less testicle. I’m not sure why they insist on asking the patient at all. Wouldn’t they have learned to write this crucial information down somewhere? Maybe jot it on a post-it note:

TAKE OUT LEFT OVARY.
DO NOT REMOVE HER TONSILS,
NO MATTER HOW MUCH YOU WANT TO!

So there I was in pre-op, all splayed out in a johnny while an RN tried to start an IV.

“And what are you here for?” she asked. I had already been asked this by nearly everyone else in the hospital at this point, including the janitor, and my response was the same every time: “Why, a tummy tuck and boob job, of course!” (The janitor seemed to think this was a good idea.)

Some nurses have a sense of humor, but this time the joke fell flat. Maybe she’s heard this one before? She jammed the needle harder into the top of my hand. “OK, I’m kidding,” I winced. “I’m really here to have a hysterectomy. Yay. She’s removing all my endo and an ovary.”

“Well… I only have one ovary left…so, I would say the one that’s still there. Tell you what — if they don’t see an ovary, then don’t take it out. If they do see one, take it out.”

Again, nothing but a solemn glare from Nurse Ratched.

She left the room. “Tough crowd,” I whispered to my husband.

A few minutes before surgery, my surgeon breezed into the room. She thought my tummy tuck joke was funny, but I noticed she didn’t actually agree to do it, so my hopes were crushed once again. Then she lifted my hospital gown and drew a circle over my left ovary.

Great, the success of my operation depends on a Sharpie.

I kissed my husband goodbye and reminded him that I might very well die on the operating table, but not to worry. Did he have my living will? Did he know how to make the kids breakfast? Did he know the Netflix password?

They wheeled me into the OR, and the last thing I remember is looking up at a large bright light, just like in the movies. The anesthesia kicked in and I drifted into a painless deep sleep thinking (and probably saying out loud to the surgical nurse) “Tummmmy tuuuuuuucccccckkkk…don’t forget it’s the only ovary there….no, no, no! Don’t take out my testicle!…just a nice tuuuuuuuuuuuuuuuuuuummmmmmmy tuuuuuuck….”

My three hour surgery was over. After a strange block of timeless time, I started to drift back to the land of the living. I was doped up to my eyeballs on fentanyl so the pain was thankfully absent. But I had this horrible crushing sensation that my bladder was full and about to explode. It was unbelievably uncomfortable. The kind of urgency you feel when you’re stuck in traffic for hours after consuming a 64 ounce Big Gulp and you want to say “fuck it” and urinate into the nearest receptacle.

Before I go any further, I have to explain that Maine women are a unique independent breed. We tend to be strong, stodgy, stubborn and stupid. My grandmother lived to 100 and she used to take my brother’s dirt bike for a spin well into her nineties. My mother still moves heavy furniture around and she’s 82. I once mowed the lawn with a push mower while 9 months pregnant. After the baby popped out, I scooped him up and continued mowing. We don’t need no help, dammit! We’re built like tanks and can power on through anything.

Except holding in our pee.

There I was in recovery, drifting in and out of consciousness, alternating between yelling that I had to go pee and drooling helplessly all over my gown. I faintly overheard an RN telling my husband I needed to sleep. Sleep? My bladder is burning hot and bursting and she wants me to sleep?! After pleading, “I gotta go pee! Please let me pee!” a thousand times in a half hour, I had had enough. Goddammit, I’m going to find that janitor! He’ll let me pee!

“It’s just your bladder having spasms, dear,” Nurse Ratched kept insisting. “You don’t have to pee. It’ll go away in a few minutes.”

Of course, the nurse probably insisted I remain lying down so I wouldn’t hurt myself. Maybe this is because I just had major surgery. And okay, in my drugged-up haze I thought my husband was Sting and the nurses giant pesky bumblebees flitting about my consciousness. But at this point, deep in agony, I was unstoppable. The sweet relief of urination was within my grasp.

I swung my feet over the edge of the bed and things began to spin. For a few moments the entire room seemed to disappear into a milky white fog. I didn’t know where my feet were. When I reached up to scratch my head, my hand moved across my field of vision like it was encased in syrup. Where was my head? Who’s hand is this? Help me, Sting!

“I can’t find my head,” I slurred to my husband as he tried to steady me. An RN and a CNA magically appeared by my other side. Ugh, Nurse Ratched! NO! You will not stop me, devil woman! I plodded forward a step only to be snagged on something. I tugged at the annoying IV line, oblivious to what the hell it was and why it was holding me back. Am I in the jungle? Is this a snake?

Before I knew it I was out in the hallway/jungle with two nurses and my husband all trying to hold onto me. They were talking to me, but my brain concentrated only on the excruciating bladder cramps. My untied johnny hung loose in the front, leaving my ass to flap in the cold breeze. I shuffled along like a tranquilized bear, occasionally pausing to try and brush off Sting and the bumblebees.  “I GOTTA GO PEE!” I hollered at random patients and nurses in the hall.

I finally made it to what I judged to be an adequate hole in the ground by the bamboo trees, grabbed onto someone’s arm, sat down and let it go.

Into the toilet, of course. I’m not an animal.

And Nurse Ratched was right. False alarm. I didn’t have to go after all. Maddening.

Still ranting to no one in particular, “Why won’t they let me pee?!” they led me back to my bed. I repeated this charade at least three more times (that I remember), each time getting angrier and louder. I was in recovery for a very long time. My surgery was at noon and I didn’t get permission to leave until 8 pm. I was close to being admitted overnight, but I think the nurses for some reason were happy to see me go.

Later on, when I was a bit more lucid and back to my normal sweet self, my husband told me how funny it was when I shoved the nurses aside and dragged my IV down the hall while almost completely naked to go to the bathroom, when I didn’t actually have to go at all.

“Yeah, that must have been something,” I said, mortified at the thought.

I faintly remember after I was discharged, I continued to whine about peeing while the nurse wheeled me (hurriedly) out to our car. I think I might have grabbed her hand to pet it like she was a kitten, and told her that she was very nice but kind of mean, too.

I blame the fentanyl.

Thanks for all the well-wishes. My surgery was a big success. All went perfectly and I didn’t die. I feel wonderful. Back to blogging!

90 thoughts on “Adventures in Anesthesia: The Urination Proclamation”